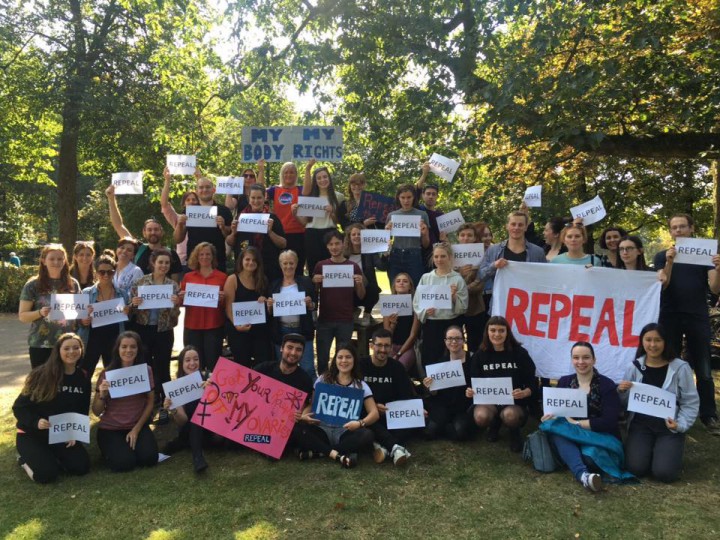 Lessons against anti-choice rhetoric as Ireland prepares to vote

These are the words of Leo Varadkar, the Irish Taoiseach (Prime Minister), casually comparing the journeys of women travelling abroad for abortion services to the frivolities of slot machines and smoking a joint. Approximately 100 women* per week travel abroad from the Republic of Ireland to access abortion services, and Varadkar’s words demonstrate the illusionary concept of travel as the ‘easy’ solution to criminalized abortion services.  Such rhetoric is a fundamental reason that Ireland facilitates this systematic exile, including to the Netherlands, that few are aware of.  This week, Varadkar announced that Irish abortion laws will be put to a referendum in May or June next year. So, with the issue of abortion likely to dominate Irish politics until summer 2018, it is more important than ever to combat ignorant and oppressive arguments, including this ‘easy’ travel narrative.

Ireland’s shameful abortion laws are its greatest secret that lurks beneath tourism adverts of emerald fields and foaming pints of Guinness. In 1983, a referendum was held in Ireland that gave a fetus equal right to life to that of a pregnant woman. Whilst abortion was illegal prior to this referendum, this 8th amendment modified Article 40 of the Irish constitution which thereafter recognized “the right to life of the unborn and, with due regard to the equal right to life of the mother, guarantees in its laws to respect, and, as far as practicable, by its laws to defend and vindicate that right”.  In other words, since 1983, abortion has effectively been considered murder of a legally protected life. This places women who become pregnant in a precarious grey area, with the rights of the fetus being taken into account for all medical decisions.

What this 8th amendment did was make flying abroad one of the only ways to access abortion services. Common solutions now include acquiring abortion pills from abroad, yet this is dangerous as customs may seize them, and it is illegal to be found in possession of them. To travel is the only safe and legal solution, yet it is not by any means easy - it is a privilege that harbors complexities and dangers for those who use it, and is a major reason to stand in solidarity with Irish pro-choice activists, who are now beginning the arduous journey of public campaigning for repeal. This will be a strenuous campaign to come - nobody wants to vote for abortion, it is a decision that no woman wants to make, and this repeal movement will be working tirelessly in the coming months to fight for a woman’s right to choose. Support and pressure from around the world is needed, and others from countries such as the Netherlands, who have the sacred, much coveted right to choose, must stand in solidarity with us. As my favourite Irish poet Seamus Heaney said, there is “No such thing as innocent bystanding”.

On Saturday 30th of September, thousands are marching in Utrecht) to show that Ireland is ready for free, safe and legal abortion services, a service that the Netherlands has offered its citizens since 1984. But few Dutch know the extensive number of Irish women who travel here seeking services that are denied because of this 8th amendment - an estimated 1,500 between 2006 and 2013 – an average of almost four every week.

The event in Utrecht on the 30th September will have workshops on common anti-choice arguments (and how we can respond to them), one being the fallacy of travel as an “easy” option. In a nutshell, to travel is a privilege that many are excluded from. For low-income households, the cost of travelling for an abortion is astronomical and to make someone travel for an abortion, you are making the human right to bodily autonomy a class issue. For women who are not able bodied, the journey to access this medical procedure is not always physically possible. For very young women, all the extra complexities that travelling abroad for an abortion entails make the procedure unattainable - the costs, the days away from home required, travelling as a minor. Trans men can also have issues travelling due to the gender on their passport or I.D, if they have not yet gone through the legal recognition process.

Furthermore, those who have a precarious immigration status simply cannot risk to travel abroad: a shocking case of this was “Ms Y”, an asylum seeker who arrived in Ireland in 2014, and became suicidal due to her pregnancy which was the result of rape. She tried to travel to the UK for an abortion, was arrested and brought back to Ireland, and was given court-ordered hydration in hospital when she went on hunger strike. A forced C-section occurred against her wishes, showing the danger of the 8th amendment - your right to choose is overlooked by the fetus’ right to live. Suicidal cries go unheard, and instead a pregnancy is forced to continue - for Ms. Y, travel was not the easy option.

Here in the Netherlands, legalized abortion is the norm -  I was amazed when I found out that my €20 per month insurance covered abortions, a luxury that few of my friends back home can believe. The system here supports my choices in ways I have not known before. It is a huge contrast to Ireland. When seeking an abortion back home, you are alone. We are wary of doctors in case they tell authorities. We worry about abortion pills being seized. We worry which is the cheapest option, about bleeding on airport seats. We deny anesthetic to make the procedure cheaper, and we lie and say we’re visiting friends when in fact it’s the loneliest journey we will probably ever make - and these worries are just for those who are privileged enough to make it in the first place. Contrary to the anti-choice rhetoric, there is no easy travel option.

Repeal the Eighth event in Utrecht is at 3pm, Saturday 30th September, at Casco. Follow www.abortrightscampaign.ie and show support with #repeal

* Traditionally abortion has been seen a women’s issue in Ireland, and much literature and data refers to it as such. Yet women, trans-men and nonbinary people are included in the fight.