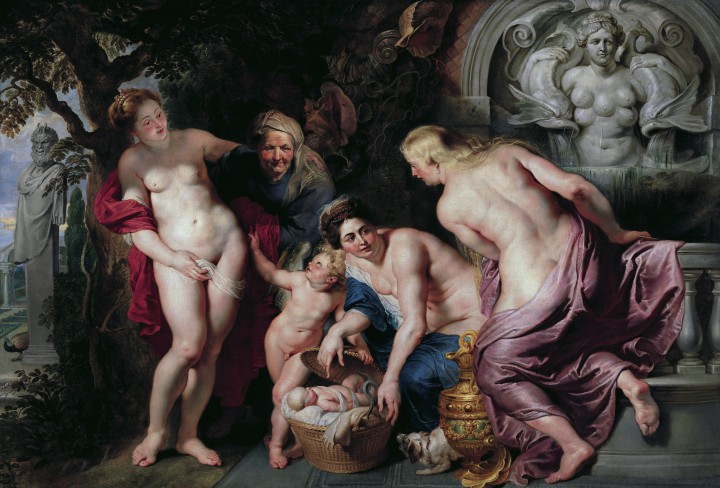 How to love/handle my belly

Soft, round and curvy: a part that pops out in my silhouet. A source of irritation. Container of food, wrapping my vital organs. My belly, occasionally somewhat of a mystery to me, a mystery that I carry around and would sometimes like to get rid of. On the other hand, after closer scrutiny, it seems to define me: a woman, (very) white, still young (I’d like to think), self-conscious but also blessed with self-mockery.

My niece is twelve years old and has, from a young age on, always been brutally honest with me. During a Sunday afternoon visit, after I have taken my coat of, she shouted enthusiastically: “Auntie Claire, is there a baby in your belly?!” She puts her hands on my stomach, as if to feel her new cousin in the making. Unfortunately, I do not have the ambition to become a mother (quite yet), so I have to disappoint her. My womb is empty.

My sister rushes to the scene, suppressing her laughter and explaining to her daughter that it is really impolite to suggest such a thing. “Aunt Claire is not pregnant.” No, she is just chubby, I think wryly. How to explain to a child that calling an unpregnant woman 'pregnant' is implying that she is fat? And that implictly stating that somebody is fat is considered an insult? Let alone the fact that at this age, living under mother’s wings, she would never understand that not every woman will become a mother.

My niece is not totally burdened yet with social conventions and does not take into account that some bodies are culturally intelligble and some are not. I bet she wouldn’t know what ‘intelligible’ means in the first place, although some value judgments are starting to shimmer through her seemingly innocent comments. Slowly, she will learn that other people and social institutions will start to define under what conditions her body will be socially accepted.

Although I’m aware of the way ideas about bodies are socially constructed, I still feel shame after my niece’s comment. I should know better, but still I turn away from her harmless gaze. Feminist theorist Sara Ahmed once described shame as “a feeling of the subject ‘being against itself’ (...) a feeling of negation.” (2004: 103) This negation of the self is caused by the feeling that we have failed an idealised other. Do I idealize my seven year-old niece? Although secretly I find it flattering if she looks up to me, that is not the case. Rather, the idealised other might be more abstract: what I felt stinging on my skin after her comment was the “imagined view of the other” (105), in this case Western society that has very precise ideas about how and when a female body is considered beautiful.

“Leave your boyfriend at home, girl.”

The incident at my sister’s house was not the first time somebody thought I was pregnant. And it was certainly not the first time that I felt like everybody else’s belly is flatter, tighter and better than mine. Although I try not to care, the persistent way in which female beauty is framed in media and the sometimes obsessive behaviour of my friends does not leave me unaffected.

In her book Frames of War feminist theorist Judith Butler describes (although in a very different context) how the mechanism of framing is  at work in the representation of many aspects of life, including the body. “(T)o be a body is to be exposed to social crafting and form, and that is what makes the ontology of the body a social ontology.” (Butler 2009: 3) Contemporary media present a narrative about female beauty in which tight, young and fit bodies play the leading part and other (deviant) bodies disappear from the scene.

It would of course be stating the obvious to say that there are many people who identify as a woman, and therefore many body types: fat, skinny, tall, andsoforth. Despite the fact that I am trying to be open-minded and down to earth about this, a week after the pregnancy-debacle, I was confronted with an encounter that troubled my previous perspective.

Saturdaynight, me and four (female) friends, dressed up, dancing, having fun. I’m at a hiphop-party in Rotterdam, dancing like there’s no tomorrow. When I took a short break to go to the ladies room, somebody touched the side of my stomach, where my lovehandles are strategically tucked away in shapewear. Ready to slap somebody in the face, I turn around. The urge to hit my pursuer disappeared immediately, as I saw a goodlooking man smiling at me. He asked me "how it is possible that I can dance like a black woman". I replied to him with the snarky comment that he might have gone mad and that he probably drops his lines with every girl that is passing by. Nonetheless, I was flattered, buying into the stereotype that black women dance better than white ones. He explained to me that he actually likes women with lovehandles and that my bodyshape is beautiful. I told him that I was already in a relationship, which put an end to his flattery, his last comment being that "I should come dance with him more often and leave my boyfriend at home."

Apparently, women with different ethnic backgrounds are associated with different types of belly’s. It doesn’t regularly occur to me that I am white and that my perception of beauty is strongly linked with my ethnicity. Had I been at a frat-party, at a different club, these compliments might have not come my way. In a way, my belly was framed differently that evening, it was put in a different context. The encounter with this man has made me realize that the dominant, Western perspective on my belly is just one point of view, which is a relief: there is not one truth that tells me how my body and belly should look like.

“You will have to be pragmatic about it.”

My belly is however not only an object of cultural and social interpretation. I have another good reason to often dislike my belly, as it causes me pain and stress a lot of the time.

It started in 2007, after a holiday to Egypt. Everybody had been sick the entire week, except for me. The joke has been on me ever since though, as I have been suffering from stomache aches starting the day we got home up until now. Two weeks ago, I had been away for the weekend with some friends. On our way back, I was dropped off at approximately five minutes from my house. However, my belly was torturing me again, and I had to stop several times on my walk home. It hurt so bad, I had the feeling I was going to faint. I barely made it home and crashed on the sofa immediately, sweating and moaning. The rave party in my belly continued and didn’t stop until late in the evening.

When it comes to problems in your belly, doctors are often puzzled. There are so many organs inside that area, that it is hard to determine which one is causing the problem. Is it my uterus and thus a ‘lady problem’? Or my bowels, and thus a ‘nasty’ problem? Therefore, I have been through many different examinations and am now sure that I am not

Although that's a relief, it still is frustrating that in the past years, no doctor has been able to tell me what I am suffering of.

Observing my belly more than I already did has however made me realize that I always hold it in. Even at home, under the shower or in bed before I fall asleep; there is always a certain tension there. It only takes common sense to connect nature and culture here: if I am always aware of a more or less imagined gaze, always ashamed and literally turned into myself by sucking in my stomache, it is no wonder that the pain won’t stop that easily. Perhaps, when it comes to my belly, loving it, might help me handling it.

Articles and books that inspired me to write this piece

M’charek, A. (2010) “Fragile differences, relational effects: Stories about the materiality of race and sex” European Journal of Women’s Studies 17. P. 307-322.