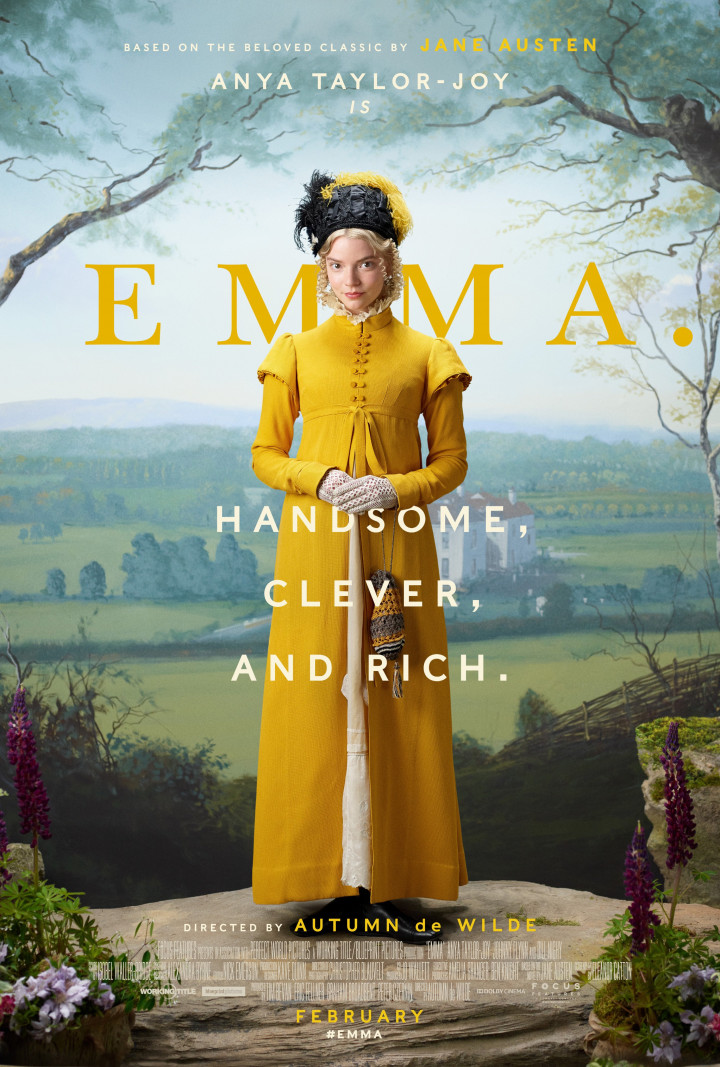 The newest adaptation of Emma (1815) by Autumn de Wilde and Eleanor Catton brings Jane Austen’s classic to a new generation. With every new adaptation I’m curious if the makers have managed to bring across Jane Austen’s wit and sarcasm, and whether they have chosen to highlight the feminist characteristics of the original novel, like my favourite adaptation of Pride and Prejudice by the BBC in 1995 with Jennifer Ehle and Colin Firth.

It is a truth not universally known that there are feminist aspects to Jane Austen’s novels. Those who have read her works know, but the general image of her is a dowdy, old-fashioned one. Film adaptations in the past have greatly contributed to that image. Most adaptations are the famous costume dramas, set in the time the novel was written. Alternatively, we have the films Clueless (1995), a modern reworking of Jane Austen’s novel Emma, and Bridget Jones’s Diary, a modern reinterpretation of Pride and Prejudice (1813). But people generally don’t associate Jane Austen with these films. They associate her with bonnets and frills and awkward dances.

It has always amazed and annoyed me that most people I know are unwilling to watch a Jane Austen adaptation, let alone read one of her novels. The response has invariably been ‘I won’t watch that, it’s for women’ or ‘I won’t watch that, it’s a costume drama’. I’m sure there are people who appreciate Jane Austen, but I haven’t come across them, apart from my fellow students of literature. It saddens me that the mainstream image of Jane Austen’s work became that of flimsy, female romance stories. And yet, it makes me proud; if it weren’t for Jane Austen, romcoms wouldn’t exist. The thing that has always irked me, though, is that which has been lost in adaptation. Jane was one of the first female authors giving a voice to strong and smart, though flawed, female heroines and what shines through most in her novels isn’t her love of happy endings but her sharp social satire and flaming wit.

It has been 25 years since the last major adaptation of the novel Emma, with Gwyneth Paltrow as Emma. The latest adaptation, Emma. (with added full stop), is by Autumn de Wilde, with a script written by author Eleanor Catton. It is visually stunning, and yes, it has costumes (bonnets and frills) but this is done in a very modern, tongue-in-cheek way, making fun of the silliness of the fashion of that time. I think this Emma appeals to a younger, wider audience. The film stays relatively true to the novel and this must be the adaptation that best captures the sarcasm and feistiness of the novel.

The story remains the same: Emma, played by Anya Taylor-Joy, makes it clear that she doesn’t intend to marry and that she has no need to marry, because she is rich. She prefers to spend her time meddling in other people’s lives, especially those of a lower class than her; enter her friend Harriet. Emma is the first ‘queen bee’, a snob before the word was invented in 1820. Of course, that doesn’t mean that snobbery didn’t exist before then. Jane Austen was brought up in a time with so many inequalities that most people then considered as normal as breathing. That’s why it’s so remarkable that she described and portrayed those inequalities in her novels with such finesse and sarcasm.

In the course of the film, as in the novel, Emma is humbled, brought down from her high horse of wealth and status. She ends up admitting her feelings for Mr Knightley and marries because she wants to and not (like her friend Harriet) because she must change her position or situation in life. And also, it is very feministic of Jane Austen to make Mr Knightley agree to move in with Emma because she can’t leave her hypochondriac father.

The release of Autumn de Wilde’s Emma. follows not long after Greta Gerwig’s Little Women (2019)with Saoirse Ronan and Emma Watson. 2018 saw the release of Colette starring Keira Knightley, and let’s not forget the series Dickinson (2019) with Hailee Steinfeld as Emily Dickinson. Each of these adaptations have strong female characters in the lead and some of them are directed or written by women. Seeing this renewed interest in 19th century literary heroines makes me very happy, not just because it means that a new generation can discover these timeless stories, but because it may just mean that Jane Austen will finally be seen as the sassy, feisty, sarcastic writer that she was.

Did you think this was a good article? Do you want the Netherlands' oldest feminist magazine to continue to exist? Show your appreciation by a (one-time) donation and help us. LOVER runs exclusively on volunteers and donations. Every euro is welcome and appreciated. More information can be found here.