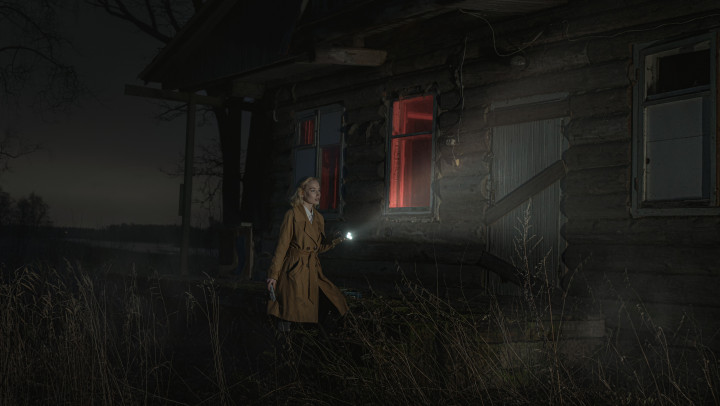 At a nightclub, a man offers a pretty blond woman a drink. She has obviously shown interest in him, but turns the drink down. He is confused - was she not interested? She then approaches him, frankly tells him that she's not thirsty… and invites him to have sex in her house. She thereby rejects the social nicety of accepting the drink and jumps straight to the point. After they have sex together, the woman simply rolls over and goes to sleep, wasting no time with polite small talk, and after her nap, she nonchalantly opens up her laptop and starts viewing graphic crime scene photos right next to him. He wakes up, shocked, and asks “what the hell is that?” She matter of factly answers, “it’s a corpse,” and then continues examining the bloody pictures. He awkwardly gets up to leave, and she simply says, “bye, thanks,” and goes back to work.

As soon as the crime series The Bridge (aka Bron/Broen) introduces Swedish detective Saga Norén, it’s clear that she doesn't abide by social conventions. As the discussion on ‘neurodiversity’ in entertainment gathers steam, it is easy to identify Saga and a handful of other female characters from television shows and series as “being on the spectrum”. Autistic women are, however, still underrepresented in television. When representation does occur, for me as an autistic person, it is still often narrow and feels unrealistic. One of the reasons for this is that, since most research on autism spectrum disorder is male-focused, symptoms are defined in relation to men (Van Wijngaarden-Cremers et al. 2014), which leads to what I call “fake autism” on TV. To illustrate this, I will analyse Saga's behaviour and compare it to other (supposedly) autistic female detectives on TV.

As is the case with most representations of autism on-screen, Saga isn’t explicitly stated to be on the spectrum in the script. As writer Hans Rosenfeldt is quick to point out in his 2014 blog post about the show it was not him, but "the media and the audience" who decided that Saga has autism, not the writers. The writing team simply envisioned her as "a woman with absolutely no social skills." However, fans - and Saga’s actress Sofia Helin herself - quickly made the connection between Saga’s mannerisms and the mannerisms associated with autism. In fact, many fans dismiss the writers’ vagueness about Saga and have fully accepted Helin’s assertions as she frankly told The Independent, “to me she has Asperger's.” But in canon, Saga joins the ranks of fictional women like Bones’ Temperance “Bones” Brennan and Girl With The Dragon Tattoo’s Lisbeth Salander who are implicitly hinted as having ASD.

There are only a handful of explicitly autistic female characters on television, including Fiona Helbron from Elementary, Smackle from Girl Meets World and Sesame Street's new character Julia.

Saga Noren is portrayed as such that she doesn’t understand jokes, struggles to build relationships, and most often struggles between what is appropriate and inappropriate to do in social settings as she strips down to her underwear while changing in her office. Many of Saga’s clashes with the neurotypical norm come about when the topic of sex comes up. Saga is very direct - an allistic person might consider her ‘blunt’ - when it comes to her flirtatious advances as well as her sex life. She lacks a filter and always says exactly what she’s thinking without any regards to what’s socially acceptable to say. She doesn’t seem to understand (nor to care) that most people don’t introduce others by saying things like, “this is Anton, we have sex now and again.” Equally unadjusted is ‘the girl with the dragon tattoo’, Lisbeth Salander. She is a hacker, very withdrawn and avoids eye contact. Another example of a character who displays traits of autism and isn’t  acknowledged by creators as autistic is Abby Scuito from NICS. Abby exhibits various forms of eccentricity, for example an occasional lack of patience when explaining scientific discoveries to her colleagues who aren’t so well versed in science but also her fondness for computers which she has assigned names rather than the people around her.

Autistic (mis)representations
When representation of autistic females does occur, it is still often narrow. Most autistic women on television are white, financially secure and have a deep orientation in science-related fields. This does not capture the true diversity of autistic women. Saga, Lisbeth and Abby are exemplary for the autisticly coded female characters on screen. They fit within a highly skewed portrait of autistic women, a female version of the trope and stock character of the absent-minded professor. Generally, these women are shown to have poor social and communication skills, and lives that center on STEM and technology-related fields. Although I do recognise a lot in these characters, me being a woman with autism, it strikes me that it seems as if the scriptwriters didn’t want to give them any developability. For example in the case of Saga: why should a colleague explain to a woman of forty, who has years of work experience, when to shake hands? That is unrealistic “fake autism” - if you want to be part of a social organisation, you cannot escape the oppressive neurotypical norm, not even if you are Saga. Their special interests in their work is quite realistically depicted, and resonate with my personal experiences, but how good they are at it is exceptional and therefore often feels fake as well. This misrepresentation may seem flattering, but it doesn’t do justice to the diversity of women with autism. Furthermore, as Maya and Simon Hattenstone rightfully state, in this way “the public is mis-sold a version of autism in movies that results in people expecting all autists to have a special skill”. This stereotyped representation of autism is common regardless of gender (Draaisma, 2009). The women are, however, often also coded as sexy and bisexual, like a new variant of the Manic Pixie Dream Girl.

For decades, autism (including Asperger’s) was considered to be a male-exclusive disorder. Males are more frequently diagnosed with autism than females - the prevalence ratio is about 4 males to every 1 female diagnosed. Scientists are realizing that girls have been systemically misdiagnosed, and that there may very well have been far more women with ASD than they realised. As clinical neuropsychologist Susan F. Epstein explains, “[t]he model that we have for a classic autism diagnosis has really turned out to be a male model. That’s not to say that girls don’t ever fit it, but girls tend to have a quieter presentation, with not necessarily as much of the repetitive and restricted behavior”. Autism manifests itself differently in women (Szalavitz, 2016), who are therefore likely to be diagnosed later in life (Bargiela, Steward & Mandy, 2016). Research has shown that autistic women have surprisingly better social and communication skills than their male counterparts; however, they do struggle with certain aspects of day-to-day functioning (Mandavilli, 2015). Additionally, most autistic women are not always averse to physical and emotional affection and they might also focus their autistic special interests on subjects like fashion, literature and arts (Egerton & Carpente, 2016). Limiting the special interests of on-screen autistic women solely to those topics traditionally associated with males feels fake as well.

The lack of proper representation of autistic women in television series reinforces the narrative that autism is a male disorder. Subsequently, the lack of awareness of autism and its unique manifestation in women contributes towards masking or camouflaging−the act of hiding autism−which is harmful (Baldwin & Costley, 2015).  Proper and higher representation of women with ASD in entertainment helps to raise awareness and diagnosis rates for the underrepresented group in question (Tharian et al. 2019). Moreover, it denies young autistic girls role models to whom they can relate. But the times, they are a-changing. Besides Sesame Street’s Julia, a case in point is Tina Belcher from the cartoon Bob’s Burgers, who fits within and steps outside of common stereotyped representations of women with ASD. While Tina displays poor communication skills as evidenced by her interaction with customers, she’s obsessed with horses and composes episodes of erotic fan fiction. Tina’s also often not sure what’s appropriate or not appropriate for conversation. Another character who presents a more balanced view of the autistic spectrum in women is Amy Farrah Fowler on The Big Bang Theory. Amy yearns for affection and various social graces just like any woman would even though she has no idea how to go about achieving these things. She has a deep interest in science and turns literal statements into laugh-out-loud humor. Counter-stereotype characters like these three contribute towards a more realistic and diverse representation of autistic women. This is important, for our stories create our reality, and the stories of autistic women are worth telling - in all their diversity and nuances.