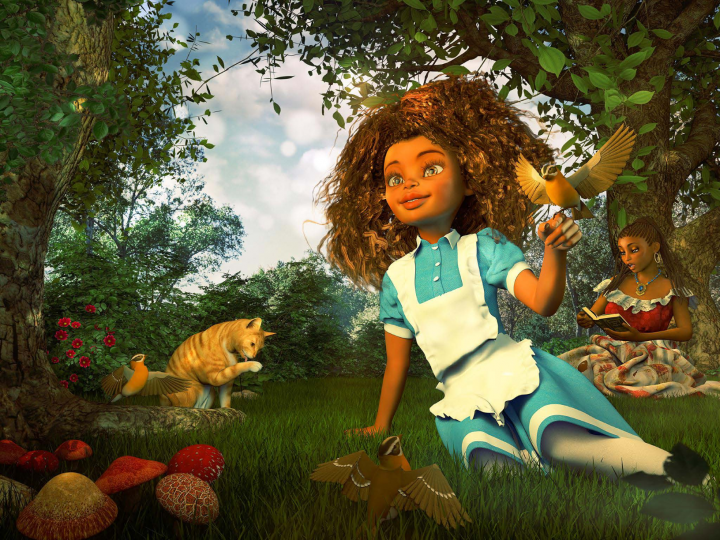 Alice in Wonderland is one of the most variedly illustrated stories ever, and yet artists over the past 150 years have limited themselves in strange ways when re-imagining this classic. Last year, I made a call for African, African American, or otherwise non-European-looking Alices in Wonderland on my blog. Several reached me, including two Australian editions, Whoopi Goldberg’s urban retelling, and the 2018 Pirelli calendar.

The book is a drastically shortened, retold version of the classic story, richly illustrated with digital images. These illustrations do an excellent job at normalising the depiction of brown-skinned people in picture books: exactly as I wished for when I made my call last year.

The book also includes some nice finds in the genre (yes!) of Alice art: there is a water-clock tea set; the Cheshire Cat practices voodoo; the White Rabbit is a DJ carrying a bling-bling watch; the game of croquet has been turned into a singing contest; and the Queen of Hearts’s children have been turned into - white - security guards, carrying guns, batons and tasers: ominous, but no less ominous than Carroll’s original.

Unfortunately, this has resulted in a book with a didactic tone and little humour. During Alice’s long fall down, for instance,

‘She saw mystical books, ancient symbols, and pictures of important historical women. Alice was dazed and confused by the images circulating through her mind, yet somehow, they felt vaguely familiar. She’d have to remember to ask her sister about them.’ [bolds in the original]

At the end of the story, ‘everyone from Wonderland finally decided to stand up to the Queen and stop her from hurting anyone else anymore.’

And after Alice’s return above ground, she says to her sister:

‘I’m just glad to be back where things are really what they seem[.]’

What chafes most in this respect, is that Lewis Carroll’s intentions and methods - to entertain children with nonsensical conversation - have been lost. And perhaps this is inevitable. The makers of the book clearly thought: what better way to strengthen a new canon than to attach it to an existing canonic work?

But in many ways, the original Alice is an anti-canonic work. Irreverence, critique and irony are at its very heart: Shakespeare is reduced to a textbook portrait of a man with a finger pressed against his forehead; the Battle of Hastings, focal point in the British self-image, is the driest story a crowd of animals can come up with; there are the ineffectual King and Queen of Hearts; haughty Humpty Dumpty falls off his wall; and afternoon tea is a never-ending affair. Every bit of British canonicity is ridiculed.

To create a similar, humorous critique of African American figureheads might, Marlon McKenney may have deliberated, undermine the purpose of his book, which was to offer its readers a first introduction to these people and make it unambiguously clear that they are our heroes. In a typical sentence therefore, Alice’s sister Kenya ‘was reading aloud from one of her favorite books by the great poet Maya Angelou.’

On the other hand, the Re-Mixed retelling also offers a refreshing take on the idea of a canon by mixing up what in books is usually demarcated as two separate realms: that of low culture and of high culture - of street art and salon art: Tweedledee and Tweedledum figure as two breakdancers on cardboard, next to the novels of Maya Angelou; vodou stands next to the high politics of Nelson Mandela.

Refreshing, but also a little risky. Because by following this tactic, and by including icons from across the history of the world, ranging from the Bhagavad Gita, via shamans, Frida Kahlo, and a southern-Asian caterpillar, to Queen Nefertari, all in a text of only a few thousand words, McKenney runs the danger of creating the impression that African American history offers little material that is worthy of a cultural canon. It is as if he only had a few people and works of art to choose from. Granted, every canon-building endeavour has to start somewhere. But by limiting himself to, for instance, twentieth-century North America, the author would have made a much stronger case for the global significance and influence of African American culture.

And perhaps the best service McKenney could indeed have done his heroes, would have been to treat them with a little less reverence. (Okay, apart from Maya Angelou. But Haile Selassie?) Because: once we can laugh with our cultural icons, we know that they have undeniably made it to the canon.

A digital copy of the book is available for free from Conscious Culture Publishing.

* This is my interpretation of the publisher’s blurb, which reads:

‘CCP is an independent publishing company committed to creating a platform for diverse content that push the boundaries of traditional storytelling. Through the creation of narratives that are a reflection of the people both creating and experiencing these stories, we empower young readers to reach their fullest potential while embracing their history and culture.

Our stories are a reflection of the global community and we believe it is important that young people of color not only see themselves reflected in stories but also have a platform to provide their own authentic voice, culture, and experience. Storytelling is an extraordinary way to educate and empower young readers and show them that they are limitless.’