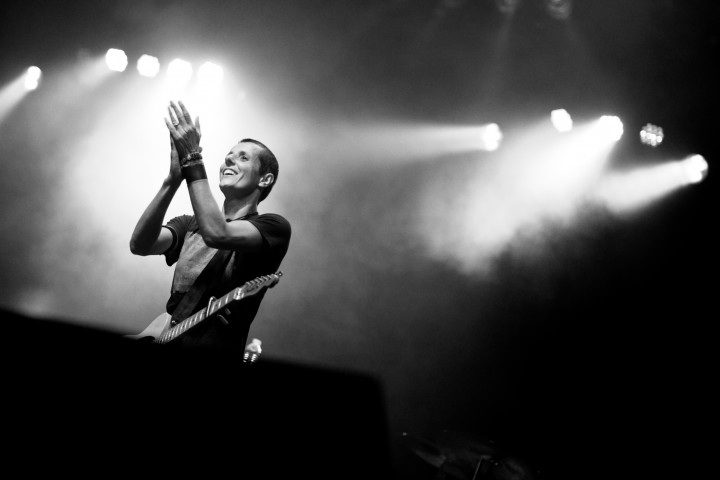 In May 2019, Sarah Bettens, the lead singer of the Belgian alternative rock band K’s Choice, announced publicly that he is a transgender man and currently transitioning into Sam Bettens, with preferred pronouns he and his. As a longtime K’s Choice fan I decided to share my reaction to Sam’s announcement and transitioning journey, mostly because it was not what I expected it to be.

I heard the news through a youtube video that Bettens shared on his Facebook account. The headline said “Sarah Bettens has big news”, and I expected to hear something exciting about a new music project. Instead, he announced that he is transgender, and I was … disappointed. Of all the things I could have been, I was … disappointed. Followed immediately by shame and anger over my feelings. How dare I be disappointed? What kind of ally am I? What is wrong with me? I have been a K’s Choice fan for almost 20 years, I am a feminist and a supporter of LGBTQ+ rights and issues. Yet, my first reaction upon hearing Sam’s news is … disappointment? That is not the kind of person I want to be. So I decided to dig a little deeper, and find out what this awful feeling was about.

Being true to ourselves

I remember my first K’s Choice concert in 2002. I was impressed by Sarah’s energetic stage performance and androgynous appearance. I admired her for not submitting to traditional female behavioural and beauty norms, for daring to be different. As the insecure teenager that I was, I remember thinking that I wanted to be as confident about my non-conformist, non-binary feminity as she was. I am saying she on purpose here, because I remember her as a woman in this scenario. Basically, Bettens has been my female role model for two decades.

So when I heard about Sarah transitioning into Sam, I was disappointed … about losing my role model. At the same time, I realized that the image I had cherished of Bettens wasn’t completely accurate either. I used to think that Sarah was perfectly comfortable and true to herself as an androgynous woman, blurring the lines of traditionally feminine and masculine looks. Yet in reality, Bettens felt pressured to look and act in certain ways so he could pass as a woman in public. “As masculine as I had become these last couple of years, I was still making a lot of little adjustments as a female: the things I was wearing, … the way I would present [myself] at school picking [up] my kids”, he said in his  Vlog #1. He also recalls having been uncomfortable with his chest for a long time before even considering the possiblity of being transgender, changing from push-up bras to sports bras and finally to binders in order to not have to see the female chest anymore. Instead, he wanted to look into the mirror and see a male body.

Becoming aware of his true gender identity and allowing himself to live as a transgender man has been a relief and a liberation for Sam Bettens. It wasn’t an easy decision to transition. Now in his mid-forties, he says that he has lived a happy and blessed life so far, and that he could have gone on living as a “masculine female”. He has a loving and close-knit family, with wife Stefanie and their four children, two brothers, parents, nephews and nieces. And he has a successful and fulfilling career with K’s Choice.

The Future of the Band

The band and their additional staff are particularly affected by Bettens’s decision, as his transition will have a strong impact on their future. For 25+ years, fans have known K’s Choice to have a female lead singer called Sarah Bettens, whose unique, husky voice has been one of the trademarks of the band’s sound. When undergoing hormone treatment during the transition from female to male, that voice is going to change, and the outcome is unforeseeable. Will Sam’s voice be as unique and beautiful as Sarah’s was? Will it be apt for the strains of a music career? Will it fit the sound of K’s Choice? Will the band find a new sound that they like and can work with? And will that sound please their audience? Will the fans even accept and support Sam to begin with?

With all of this in mind, the weight, but also the strength of Bettens’s decision to transition becomes clearer. There simply was and is a lot at stake for him. He said in recent interviews with Linde Merckpoel and Margriet van der Linden that he did wonder why it took him so long to realize that he was transgender. And that it was puzzling and confronting to realize that he did somehow suppress his true identity for all these years, despite considering himself to be a confident and reflexive person, who dared to do his own thing and follow his personal values and beliefs in life. His therapist then encouraged him to be more gentle, understanding, and compassionate with himself, making him see how strongly our social environment, upbringing and workplace influence us.

On a socio-cultural level, I think that Bettens’s long journey is a rather perfect example of how prevalent heteronormative values still are in Western societies. It illustrates how many (if not most) of us are still raised implicitly as cis heterosexuals and not encouraged to actively discover our gender identity as teenagers. Sam Bettens, born in the early 1970s in Belgium, said that he simply never wondered about his gender identity. He grew up to believe that he was a heterosexual woman. He does recall feeling that something was missing at times, but always decided not to dwell on that thought. Instead he focused on work, family, and life in general. Yet, at 28 years old, he discovered that he was actually attracted to women, and at 45 that he is a transgender man.

I certainly wish Bettens could have been in touch with his true identity earlier in life. But there is little point in dwelling on the past, and as a fan and an ally I will focus on the future along with him. I enjoy watching the weekly vlogs about his transition that he shares on his new youtube channel. He documents his current physical and emotional situation, and discusses common challenges that transgender people face, and with it publicly shares his transition with the trans community, with K’s Choice fans, and with anyone else who is interested. Once again I find myself deeply impressed with Bettens’s strength, courage and public appearance. I may have lost a female role model, but I found an inspiring gender role model instead.