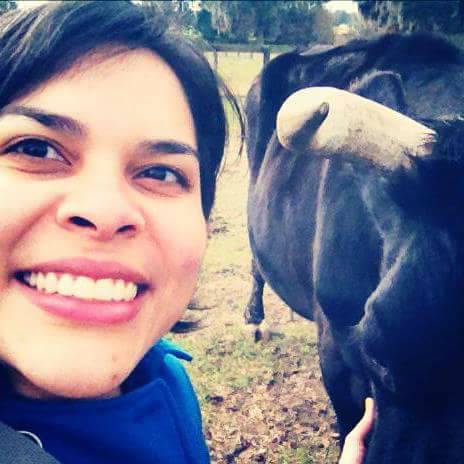 It is not uncommon to read of feminists rationalizing the idea that nonhuman animals exploited for their reproductive systems and their struggles are unrelated to feminism. However, this could not be further from the truth. Anti-oppression theorist, Aph Ko explained that, “Animal rights is a feminist issue…In fact, the objectification and exploitation of animal lives and bodies ought to come under great scrutiny by feminists given that feminism is all about fighting against the way patriarchy dismisses certain being’s interests and subjectivity for the benefit of arbitrarily designated ‘superior’ beings.”

The exploitation of those used by humans for their reproductive organs and bodily fluids (i.e. milk) and products (i.e. eggs and flesh) under a patriarchal system should be reason enough for pro-intersectional feminism to adopt the principles of veganism, a political lifestyle that aims to liberate nonhumans from exploitation, abuse, and needless slaughter by humans. Nonetheless, this is but one of several validations that establishes a need to embrace a feminism that is inclusive in its anti-oppression stance on behalf of both humans and nonhumans.

The concept of speciesism and how it is used to “otherize” women and non-male marginalized genders (MaGe; coined by Crystal Michelle) of color bridges the gap of the interrelatedness of intersectional feminism and veganism. Historically, people of color and nonhuman animals have fallen victim to “otherization” – a tactic employed by systemic white supremacy whereby “others” are of less value compared to the “normalized” way to be: white and human. Scholar Margaret Robinson has written extensively about the link between speciesism, the idea of human supremacy, as applied to Indigenous communities and how this very notion has been used to historically label Indigenous people as “less than”. This allowed white people to categorize Australian Aborigines as part of the actual flora and fauna, and to label Indigenous communities as “less evolved” because of their customs and traditions. The idea that “other” beings are “less than” helped establish whiteness as “superior”, while promoting the notion that non-white humans were closer in relation to nonhumans. As was done to Indigenous peoples, historic examples of abuse justified through otherization also allowed for the exploitation of women and MaGe of color from other communities. For example, the foundation of the field of gynecology was established on the abuse of Black slaves, whom were operated on without anesthesia. In the 70s, Black and Puerto Rican women and MaGe were experimented on and forcibly sterilized without consent. The idea that Black people and other women and MaGe of color have higher pain tolerances than white women stems from cruel experimentations on Black and Brown bodies; this implicit bias persists in the medical field today and affects how women and MaGe of color are treated when seeking medical treatment. Moreover, the subconscious idea that women and MaGe of color are “less than” and the unspoken rationalization that “they” do not have the same rights as white women to reproduce, go hand in hand with oppressive colonialism, classism, racism, and other forms of historically justified oppression. These are to blame for the lack of opportunities and struggles that face women and MaGe of color yet protect white women and their wishes to have children without limit -  through racial privilege.

Although human oppression is different to nonhuman oppression, the similarities for the justifications of the oppression are similar under a white supremacist system. Otherization lets humans see nonhumans as less than and allows for the exploitation of nonhuman with exploitable reproductive systems. It normalizes humans to steal their babies (as was done to Indigenous communities in order to force white assimilation on them) and to sell their milk as a commodity, which then fuels the veal industry by providing a steady stream of calves from forced pregnancies needed for milk production (using female and MaGe bodies without consent). The same otherization further justifies nonhuman exploitation in animal testing (“they don’t feel as much as we do;” “they don’t have any self-awareness!”) or any other form of oppression, abuse, and use that you and most other humans allow and accept without question.

In their book Aphro-ism (2017), Authors Aph and Syl Ko discussed the realities that the classification system of human vs. animal is an idea founded on white male rationale. It’s worth considering that if we finally oppose the idea that human and animals are opposite and begin to recognize the interrelatedness of oppression and the idea that humans are animals and that animals are also individuals on their own instead of a lump sum group that we see collectively as “them”, we will finally begin to break the cycle of oppression that is kept in place through a system still purported by white supremacy.

Furthermore, the environmental aspects and benefits of plant-based diets as they relate to women and MaGe across the globe are also cause for embracing a feminism that is aware and free from nonhuman animal exploitation. Puerto Rico, a modern-day colony of the United States of America, sits in devastation from the largest, most disastrous hurricane in recorded history. Puerto Ricans are victims of colonialism, and as many others in the Caribbean and other parts of the world, they are people of color surviving a history of racism and oppression living with outdated infrastructures and the consequences of a white supremacist system that disallowed their progress. Although hurricanes are a normal occurrence in the Caribbean, the size and intensity of the hurricanes that struck the island within a week of each other is due to climate change. The United Nations (2010) stated in a report that in order to reverse climate change, the one immediate action people could do was drastically reduce their dependency on animal agriculture, which is a top cause of greenhouse emissions and the destruction of the environment. The report stated that moving towards animal-free diets (meat and also byproducts like dairy) would have the most benefit against climate change and would also be instrumental in helping to fight poverty and world hunger. Thus, veganism is an immediate action humans can take without having to await the slow moving politics that are still debating whether climate change is even real and what to do. Unfortunately, women and MaGe of color, those least responsible for the irresponsible exploitation of the planet’s resources, are those being the most affected by the effects of climate change. Restaurants throughout Europe proudly boast that their animal products are local or sourced in countries like Brazil without thinking of the implication of what that means for those less privileged that are and will continue to experience the disastrous effects of our deteriorating planet due to the actions of countries that use the most resources per individual and exploit other parts of the world. This all to satiate a desire for animal products when these products are not even necessities. Justifying these industries because communities across the world have been made dependent on them by those “at the top” is unethical. We must actively work towards a complete overhaul of systemic white supremacy and traditions that are simply unsustainable and oppressive.

Veganism holds a role in fighting speciesism, otherization, and even environmental degradation, which affect nonhumans and in turn, Women and MaGe of Color. Is it possible to still claim that veganism is unrelated to feminism?

Born and raised in Puerto Rico, Julia Feliz Brueck is a published author and illustrator, scientist, and founder of Sanctuary Publishers, www.sanctuarypublishers.com - a vegan book publisher working to raise and support the voices of marginalized communities. Her most recent books include the Baby and Toddler Vegan Feeding Guide and Veganism in an Oppressive World. You can learn more about Julia’s work via juliafeliz.com

Amazing article! It's filled with so much truth and hits home on so many things. I wish pieces like this were more widely published!