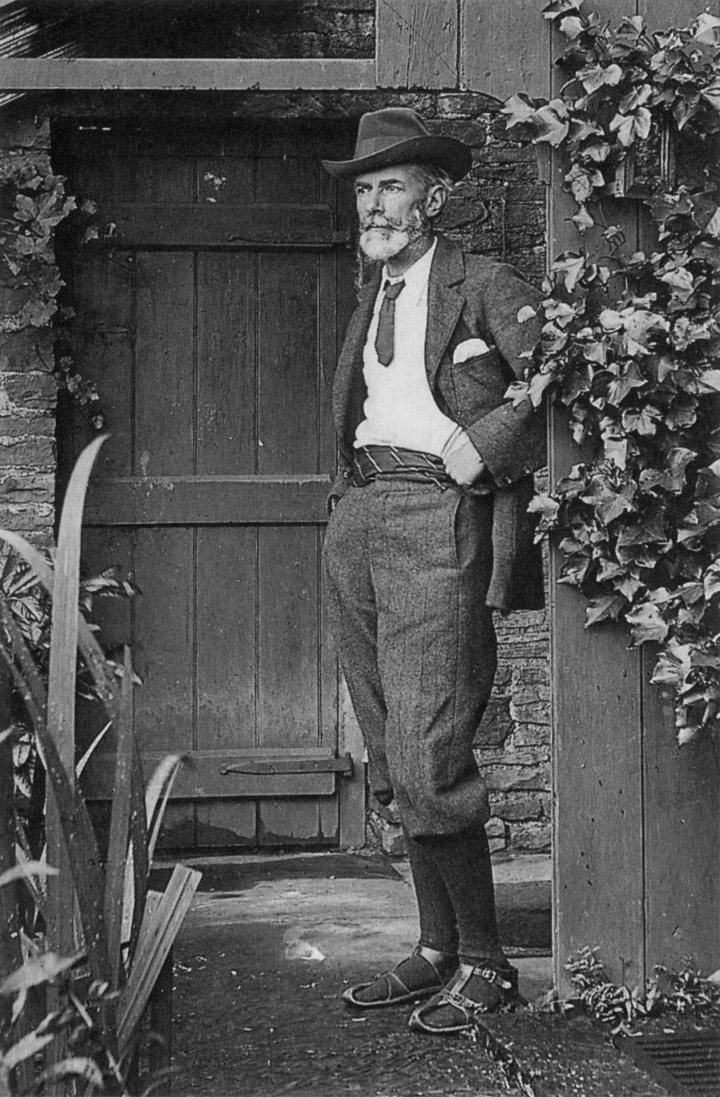 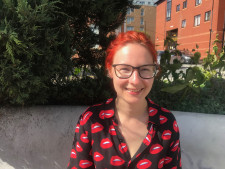 When queer histories are mainstreamed

This photo of Edward Carpenter is often used to champion gay rights: 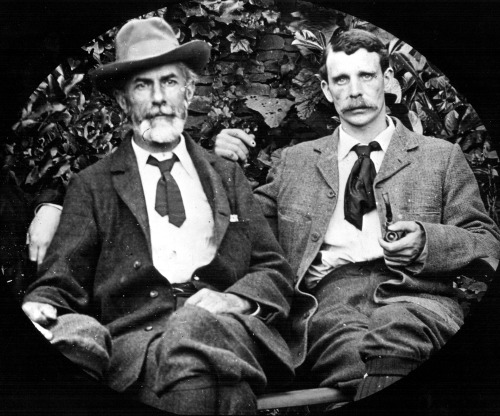 Yet it is a mysterious photo.

At first sight, it simply depicts the intimacy between a man and another man. On the left: nineteenth-century celebrity Edward Carpenter, proto-gay-rights activist and writer. On the right: George Merrill, home-maker and previously employed in an ironworks. The two lived together in the turn-of-the-century English Peak District for thirty years. They present a picture from the past that gives hope for the future.

Still, such pictures are also often used in a manner that simplifies past lives. I would like to use the occasion of LGBT+ History Month to reflect on the fact that this simplification actually limits the variety of sexual and gendered lives that we can imagine for our future.

History institutions on queer sexualities
As said, this photo pops up in many recent publications on LGBTQIA+ histories, often by heritage institutions that do not in the first instance focus on queer histories. It is used to show not only that gay love existed in the nineteenth century, but that it was in some cases fairly widely accepted. This was the time of the Oscar Wilde trials, and yet Merrill and Carpenter lived openly together and Carpenter published highly appreciative texts about same-sex love.

Such institutional publications are often the work of a variety of people with different motives and expertise. Apart from being used to 'uncover our histories' and inspire present-day activism, this particular photo also provides a suitable image for institutions that wish to profile themselves as progressive and inclusive, yet at the same time need to keep in touch with their more conservative supporters. Carpenter and Merrill are quite helpful here: they present themselves as two well-dressed men, a pair of white middle-class British home-owners, with hat, beard, and pipe, quietly seated in their own garden. Their picture shows us an established, even somewhat stern couple; not people from whom we should expect any 'trouble'. In sum: the photo helps make diversity respectable.

The British Royal Historical Society is one of those institutions in whose publications the photo recently featured. The Society had just published their report onLGBT+ Histories and Historians and launched a collections of resources to go with it. These aim to assist teachers and researchers in their work on "LGBT+ and queer" histories, as well as everyone else in the heritage industry and historical profession who wants to be sensitive to their own and to their colleagues', students' and visitors' diverse genders and sexualities. In the article in which it appears, the photo is included for illustrative purposes: it is not discussed in the text that it accompanies, and was probably added by the editors of the site rather than the author of the article. Whereas the text of the article speaks of a range of gendered and sexual experiences, and their strangeness to present-day western-European expectations, the photograph is in the first instance a simple picture of two men demonstrating their happy domestic relationship. Yet is that the full story of this photo?

The fifth hand
Not quite, for you may ask what are that fifth hand and that fifth knee doing on that garden bench? We see Merrill's hand on Carpenter's shoulder but Carpenter's own hand is on someone else's knee, and a fifth arm is sticking into the picture.

Here is another one. Picture Sheffield do not allow us to insert the image here - only to refer to their site.
Again, a photo of Edward Carpenter, taken by Alfred Mattison and now in the Sheffield city archives. This time, however, Carpenter is sitting close to George Hukin, who was a razor grinder and, at least at some point in their lives, in a loving relationship with Carpenter.

I have seen this second photo used for the same purpose as the first: as an illustration of happy real-life homosexual relationships in the past. And again: there is that fifth hand.

As may have been obvious to you for some time now, these are one and the same photo. On the one with Merrill, it is Hukin's hand; on the one with Hukin, it is Merrill's. The complete photo, too, can be found in the Sheffield city archives (Carpenter/Photograph Box 8/52). Still, they are almost always presented as two separate ones. Carpenter cut in half.

The full picture?
The British governmental organisation Historic England, which cares for part of England's built heritage, has a similar section on their website. It is called "Pride of Place" and showcases examples of "queer heritage" in their properties. This website makes a lot of effort to situate past sexual and gendered lives in their appropriate historical context. The page about Carpenter's home, consequently, does present the full photo. Here, we also find another sitter who is usually left out of online renderings of the picture: a dog, who remains nameless on the caption. The photo makes us very curious about this ensemble of people: their relations, their routines, their feelings. Yet the site only talks of Carpenter as promoting the freedom to have "gay relationships". This would have been a great opportunity to talk about other aspects of his “queer” life as well.

The circle of Friends of Edward Carpenter, too, shares a number of photos on their website that show Carpenter as simultaneously intimate with more than one person. Yet in the texts on the site, his life is again described as one defying norms of sexuality specifically in terms of "living openly with his lover [George Merrill] and writing bravely about it".

To anyone interested in the precise romantic configurations of Edward Carpenter's life, I wholeheartedly recommend Sheila Rowbotham's Edward Carpenter: A Life of Liberty and Love (Verso, 2008). She writes about two of his friends, female friend Fannie Hukin and male lover George Hukin – the two a married couple: “There were no known patterns for their criss-crossing emotions. Yet somehow, without any maps to guide them, they had contained the pain and prevented it from breaking out in ugliness and anger. This must have required a tremendous effort of will on the part of all three of them.”

Palatable diversity
When we write new gay (or LBTQIA...) histories, or canonise new gay heroes, we often lose sight of what made them so unacceptable in the first place, and why those parts of their lives have been so often ignored: the fact that they took the freedom to diverge from accepted models of living. This is what that word "queer", which the Royal Historical Society chooses to use, means: everything for which we do not have a name; everything we cannot put our finger on; everything incorrigibly odd.

Queer histories already lose some of that ‘oddness’ when we write about them and devise names for them. When queer histories are adopted by institutions, even more is perhaps bound to disappear. In this case even an entire person on a photo. In order to put them on our national heritage and professional society websites, we make these stories understandable first. We make them palatable, by removing those elements that do not fit the new standards that we have grown used to: gay rights, for instance, but only in the form of the monogamous gay couple, sharing home and garden.

And yet the Royal Historical Society writes: "LGBT+ histories and perspectives in all their diversity need to be represented in teaching and university-based research, as well as in museums, galleries, archives and libraries." (my italics)

True, this photo helps make diversity acceptable. As is so often the case, however, diversity becomes acceptable only by making it less diverse. Not only by choosing a picture of two  ‘presentable gentlemen’, but also by modifying it in such way that it conforms to present-day social norms.

Although ironic, the fact that diversity is made less diverse may not come as a surprise. Still, that the Royal Historical Society, an institution dedicated to the furthering of the historical profession, gives us only a cut-out from a photo with no mention of the original shape of this source or even its origins, surprised me. It is even more remarkable that this happens on a website dedicated to the acceptance and promotion of teaching and research into the diversity of relationship forms that have existed across time – which truly do form a cornucopia for any history buff.

The fact that Edward Carpenter, George Hukin and George Merrill were intimate with more than one person at a time, and with knowledge both of their partners and of those who were allowed a peek into their family album, is something that by such practices continues to be erased from historical accounts. They were proud enough to take this picture. Now let us be brave enough to look at it.

Anna P.H. Geurts (Radboud University/University of Sheffield) is a teacher, writer and translator of histories. Geurts investigates how people handle space and time in everyday life. She is also the Historian at Large.