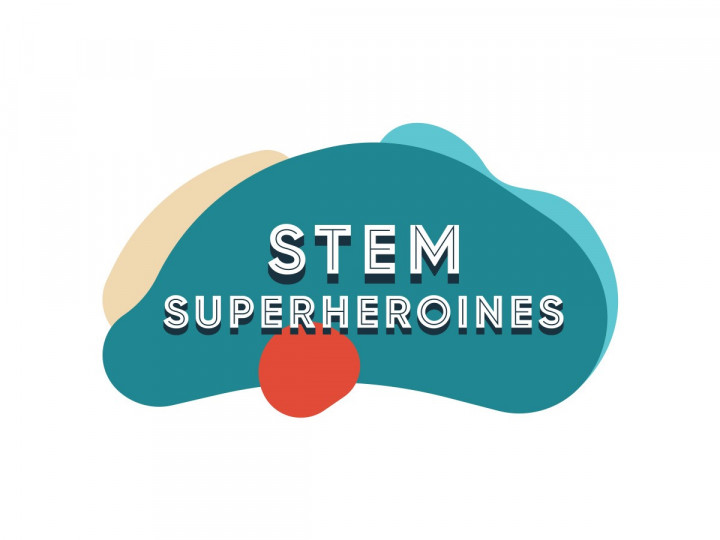 Last week Tuesday Ada Lovelace day, a celebration of the achievements of women in STEM, was marked by worldwide appreciation for inspiring women in science today. This year the campaign 'STEM superheroines' aims a spotlight at eight female STEM pioneers who overcame the constraints of their times to make remarkable contributions to their respective fields. The campaign reamagines these pioneers as the superheroines they truly are.

“That brain of mine is something more than merely mortal; as time will show” 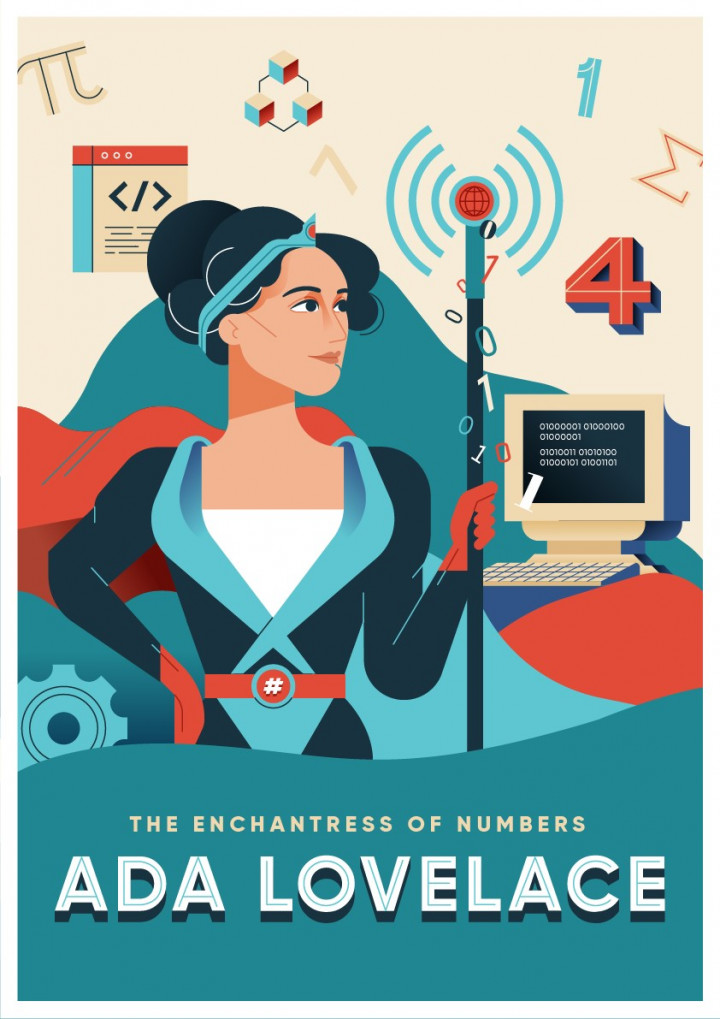 What did Ada Lovelace invent?

Lovelace is recognised as the world’s first computer programmer. While poring over the designs for Charles Babbage’s mechanical computer, dubbed The Analytical Engine, Lovelace reached a remarkable conclusion: If the machine could manipulate numbers to solve equations, it could also manipulate symbols, and thus could be instructed to do almost anything.

While Babbage focused on producing flawless mathematical tables, Lovelace saw that the Analytical Engine could be programmed to create music or graphics. To demonstrate the power of the Analytical Engine, she wrote a detailed description of how it could calculate an important series of numbers called Bernoulli Numbers.

This invention is seen today as the world’s first computer program.

How was Ada drawn?

To do justice to Ada, we looked at a portrait of the scientist from circa 1840.

In our reimagining, a red cape billows behind her and she holds a representation of the World Wide Web like a trident. We settled on flat colours with limited use of shadowing to give volume.

“Each illustration begins with a pencil drawing,” says Marta Colmenero, illustrator on the campaign. “In the pencil drawing, I work out the arrangement, then start bringing it to life on the screen using a Microsoft Surface and Surface Pen.” 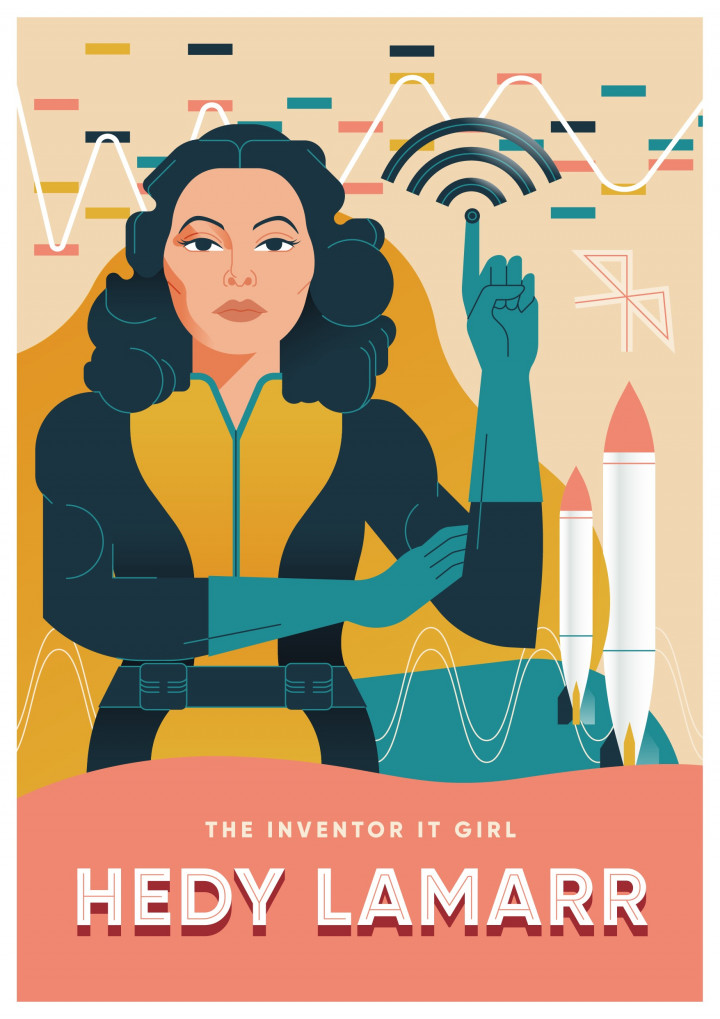 What did Hedy Lamarr invent?

Considered by many the Angelina Jolie of 1940s cinema, Lamarr was disillusioned with the idea of starring in films while the Second World War raged.

She and her neighbour, the composer George Antheil, filed a patent for a “frequency-hopping” system that would allow Allied torpedoes to travel unseen under the water without being intercepted by German intelligence.

Though the patent was granted in 1942, the idea was never used during the war. It was, however, picked up by the Navy in 1957, and today is one of the principles behind Bluetooth, GPS and Wi-Fi.

“We focused on geometrical shapes: the straight lines in Hedy’s hair, the 45 degree angles, offset by a more rounded, ‘realistic’ looking face,” says Marta Colmenero, illustrator on the project. “She was my favourite to draw: just so beautiful and inspiring.”

“Science and everyday life cannot and should not be separated.” 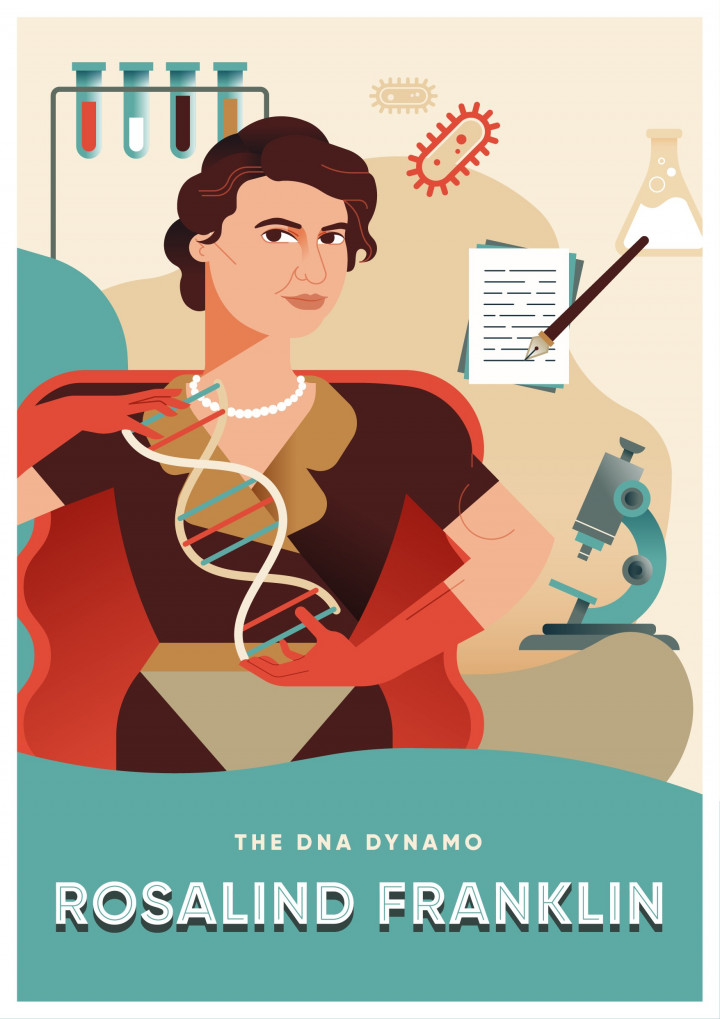 What did Rosalind Franklin discover?

For a long time, the history books gave credit to two men for discovering the shape and form of DNA: Francis Crick and James Watson. But without Rosalind Franklin, they wouldn’t have had all the pieces needed to complete the puzzle.

Franklin captured an X-ray image of DNA, proving a long-held scientific belief that DNA was likely composed of two opposing coiled chains: a double helix, in other words.

As fate would have it, Crick and Watson were given access to Franklin’s work. The photo, along with their existing research, gave them free rein to take credit for the structure of deoxyribose nucleic acid, their findings published in Nature magazine in 1953. A small footnote in Nature acknowledged Franklin for having “stimulated” aspects of the discovery, but Franklin died an unknown commodity outside the scientific community.

“Women are liberated from the time they [are born].”

Apgar specialised in anaesthetics, with a focus on analysing the effects of these drugs on newborn babies and mothers.

Her proximity to the postnatal wards meant she was able to make a troubling observation: babies who were born blue in the face or struggling to breathe were being written-off as stillborn. Apgar reasoned that, in many of the cases, if treatment was delivered swiftly, the baby could be saved.

She devised the “Apgar Score” in response. When a child is delivered, they would be judged on their heart rate, breath, muscle tone, reflexes and skin colour. Each category carried a score of either 0, 1, or 2. Once these scores were totted up, children in danger could be easily identified and sent off for immediate treatment.

The “Apgar Score” gave nurses the teeth to act swiftly and gave babies a fighting chance. In part because of Apgar’s simple system, deaths of newborn babies dropped from one in 30 in 1950 to one in 500 in America today. 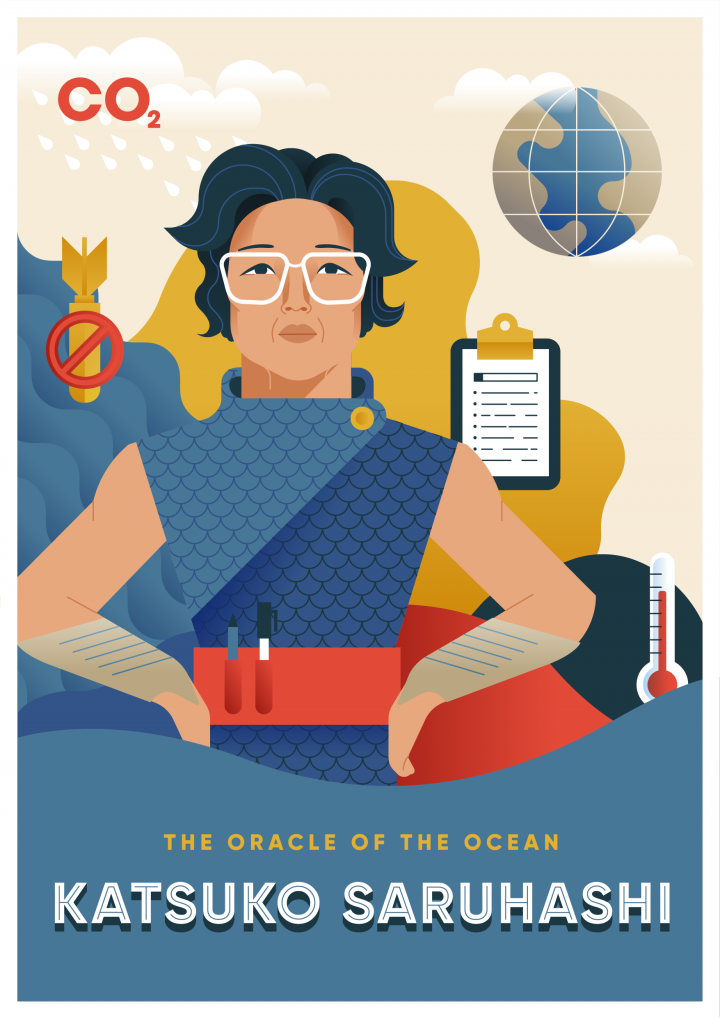 Katsuko Saruhashi came to prominence in the 1950s when she concluded that carbon dioxide (CO2) – produced by humans and big industry - was killing marine life. She brought this fact to the world’s attention, then armed scientists with a system for measuring it – the Saruhashi Table is still used today.

In the 1960s, she turned her attention to nuclear waste. The United States had been testing nuclear weapons on islands 4,500 kilometres from Japan. Saruhashi discovered that in the space of 18 months, radioactive water had turned up on Japanese shores. Her research helped tighten ocean laws governing nuclear experimentation. 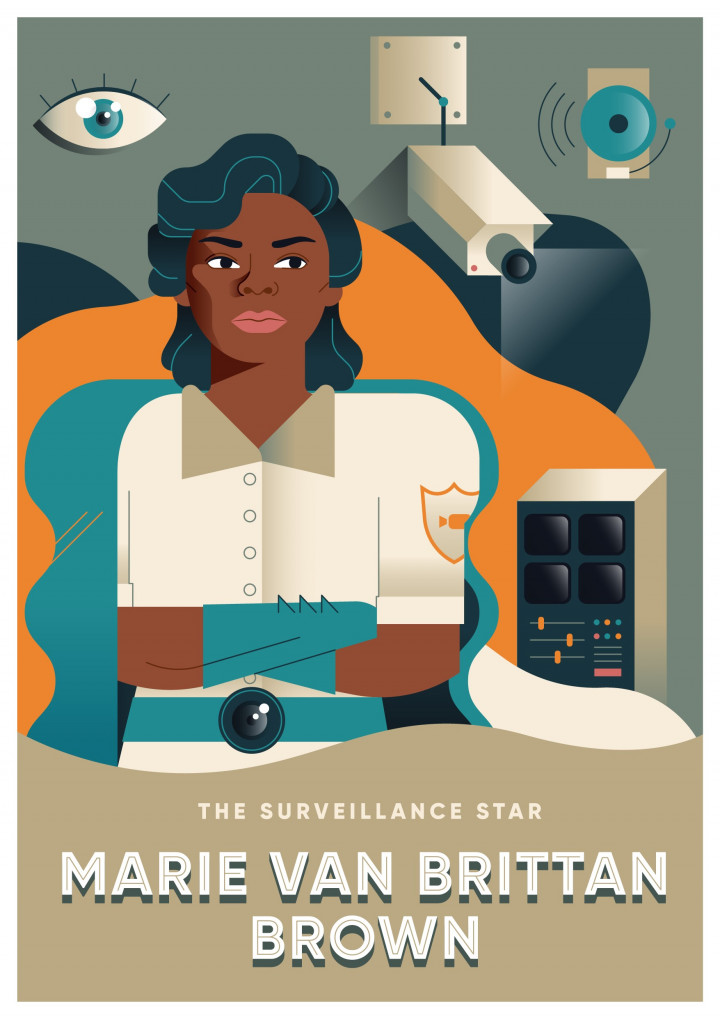 Marie Van Brittan Brown worked odd hours as a nurse and was often home alone in Queens, New York in the 1960s. Fearing for her safety, she decided to take matters into her own hands by inventing the world’s first home security system.

Working with her husband Albert, Marie drilled four discreet peep holes through her door, then installed a camera attached to a motor that could move between the four holes at the behest of the homeowner. This was rigged up to a monitor in Marie’s bedroom, and a microphone was installed so that Marie could address door-knockers without having to get out of bed. If the intruder was welcome, a button could be pushed that opened the door remotely. If not, a separate button pinged the emergency services.

The husband and wife duo filed a patent in 1966 and this early blueprint is still inspiring inventors today.

“I hope I'm saving lives. There are very few people in their careers that have the opportunity to do something to benefit mankind.”

Of all the inventors on this list, perhaps no one has saved as many lives as Stephanie Kwolek. Why? Well, Kwolek discovered Kevlar in 1965.

At the time, she was a DuPont employee working to find a lightweight material that could reinforce car tires. She spent her time experimenting with liquid solutions that she melted at temperatures reaching 200°C and “spun” into thin, fibrous strands – a process broadly similar to making cotton candy. Kwolek discovered that, by lowering the temperature, she was able to spin something incredibly strong, stiff and light: Kevlar.

It’s a buttermilk-coloured yarn that’s five times stronger than steel and has reinforced police jackets since entering mass production in 1971.

“Love of learning is the most necessary passion… in it lies our happiness. It’s a sure remedy for what ails us, an unending source of pleasure.” 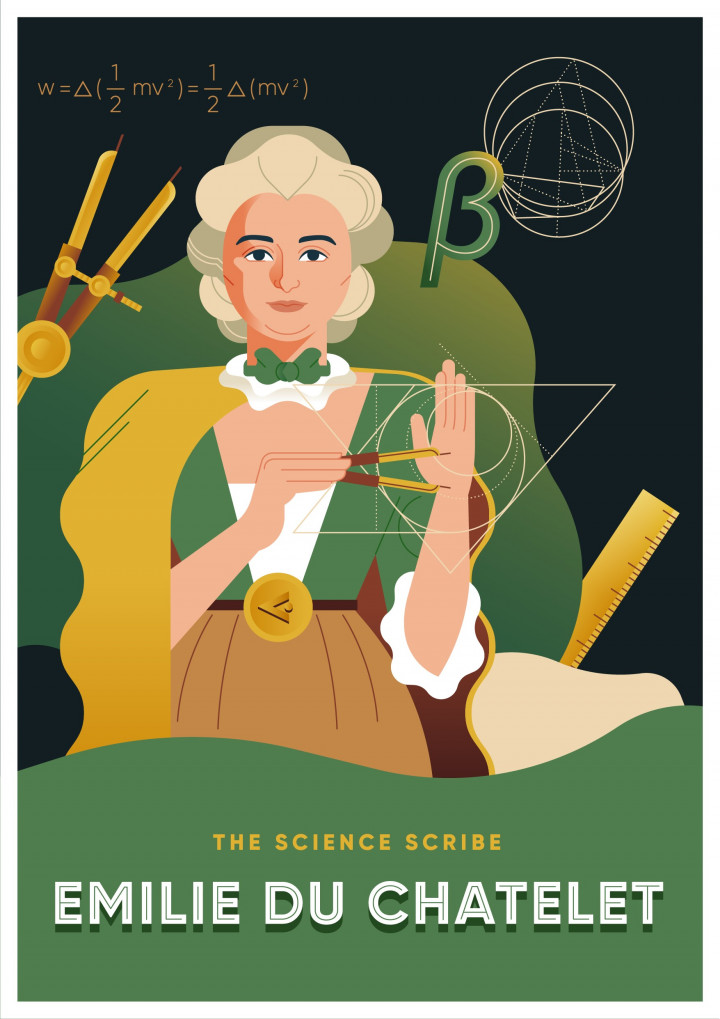 Emilie Du Châtelet had complementary gifts: an ability to comprehend complex science, and an ability to describe that science to the masses.

She is famous for translating the works of Newton, whose science was new, ground-breaking and almost entirely alien to the French people of the time.

At 42, du Châtelet fell pregnant in an era when childbirth was incredibly dangerous and at an age where her odds of survival were slim to none. She worked long days and nights to complete her magnum opus before she died: a complete translation of Newton’s Principia, adding in extensive notes and a summary section where she cleaned up Newton’s obtuse prose and gave clear, digestible, bite-sized bits of information. She managed to complete the work before her untimely death, and today, du Châtelet’s translation remains the definitive French-language version.